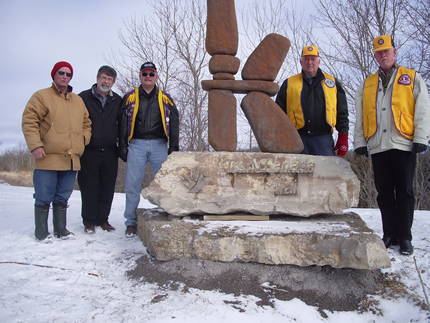 OMEMEE – A sculpture has been added to the Trans Canada Trail in Omemee where the trail borders the City of Kawartha Lakes with Peterborough County.

An inukshuk in the shape of a ‘K’ now welcomes trail users and passing cars on Emily Park Road, about half a kilometre north of Highway 7.

KTCT Association president Al MacPherson, his wife Barb MacPherson and Petitjean began designing the sculpture in August of 2009. The construction started in November and was completed this month.

Members of the Lions clubs in Omemee and Fowlers Corners were on hand with MacPherson this month to mark the completion of the project. The Lions clubs work with the KTCT Association to maintain the portion of the trail that passes through Omemee.

The sculpture is made of steel that was hammered to look like stone. It sits on a limestone base. ‘Trans Canada Trail’ and its logo are written on the base. The sculpture is designed to require no upkeep.

Rene Petitjean has been sculpting since 1972 and teaches at theHaliburton School for the Arts in sculpting and blacksmithing. His work can be found in public and private collections across North America, including with private collectors in the City of Kawartha Lakes.

“The sculpture lets people on Emily Park Road know we have a trail. It’s like a little billboard.” – KTCT Association president Al MacPherson

“It was fun to make but the guys who work for me are upset because their arms hurt. There were 80 hours of banging.” – Sculptor Rene Petitjean