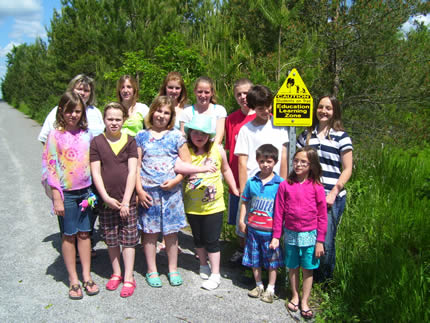 There are four school zones located along the trail.

All four schools – Mariposa, Jack Callaghan, Scott Young and Lady Eaton – have adopted a section of the trail and have started stewardship projects such as installation of bird nesting boxes and wildlife shrub plantings.

The Kawartha Trans Canada Trail Association is proud to have the schools involved as community partners in the management of the trail.

The City of Kawartha Lakes (Lindsay and Ops) Police Service and the City of Kawartha Lakes – OPP Detachment have been provided a letter of authorization from the Board of Directors of the Kawartha Trans Canada Trail Association to access the Trans Canada Trail in order to Act as its agent for the purpose of provincial enforcement in the event of inappropriate use such as ATV and Dirt Bike and enforcing the Trespass to Property Act and other related legislation.

What is an electric bicycle?

An electric bicycle meets the definition of “motor-assisted cycle” under the Ontario Motor Vehicle Safety Act, as follows:

For a detailed description of motor-assisted cycles as defined by the Motor Vehicle Act, visit the Ontario Ministry of Transportation web site at www.mto.gov.on.ca/english/dandv/vehicle/emerging/e-bike-faq

Are electric bicycles allowed on the KTCT?

Yes. Following a comprehensive review, KTCTA decided in November 2008 to allow electric bicycles on the KTCT.

Why did KTCTA decide to allow electric bicycles on KTCT?

KTCTA received requests from members of the public to use electric bikes on the KTCT, and as a result carried out a review. KTCTA is supportive of this new green technology, which may benefit trail visitors with disabilities and mobility restrictions. As well, E bikes are powered by an electric motor and muscular power, and have zero emissions.

The maximum speed of 32 km/hour (20 mph) is equivalent to the speed reached by an average cyclist on a traditional bicycle. Regulators wanted electric bicycles to match the speed of conventional bikes. If the speed had been set lower

(24 km/hour), as first proposed, commuter cyclists would find electric bicycles too slow to be a reasonable alternative to travel by car.

Do other Provinces or cities allow electric bicycles on their trails?

Yes. KTCTA is following the lead of other jurisdictions, such as the City of Ottawa, City of Victoria which permit electric bicycles on trails where bicycles are allowed. Electric bicycles are common in many cities in California, where they were developed, and in Europe. As well, currently, eight Canadian jurisdictions (British Columbia, Alberta, Saskatchewan,Manitoba, Quebec, Nova Scotia, Newfoundland and Labrador and the Yukon Territory) have legalized power-assisted bicycles for public road use and are treating these vehicles as conventional bicycles and not as motor vehicles

Do electric bicycles have to follow the same rules as other cyclists on the trail?

Yes. All cyclists must obey the posted etiquette rules and be courteous to others. KTCTA strives to ensure that all visitors to the trail have safe and enjoyable visits.

Do I need a license for my electric bicycle?

No license or registration is required. However, cyclists on electric bicycles are required by law to wear helmets and be 16 years of age in Ontario.

Will this issue be considered again in the future?

For more information on regional parks and trails, please visit the Ministry of Transportation web site at www.mto.gov.on.ca/english/dandv/vehicle/emerging/e-bike-faq