Special Thank You to our Managing Partners and Volunteers

Students from IE Weldon Construction Trades Course build and install a boardwalk from Jack Callaghan Public School to Kawartha Trans Canada Trail to provide access for students to the trail including some students who are physically disabled.

Warm Up to the Vancouver Olympics 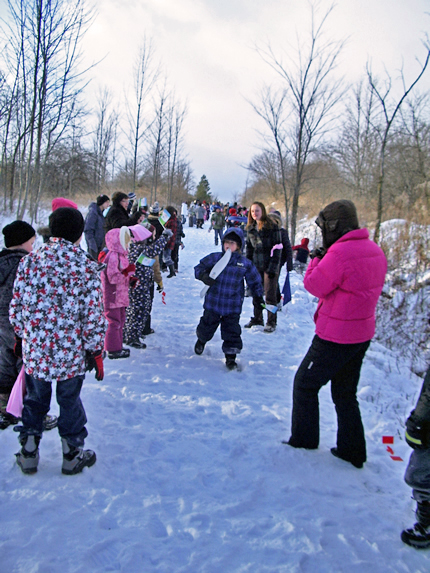 Students and Staff at Jack Callaghan School practice carrying the replica Olympic Torch along a section of the Trans Canada Trail. The “real thing” arrives Dec. 16th, 2009 in Lindsay. 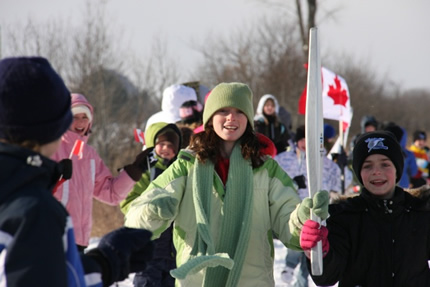 Lilac Park is part of the Kawartha Trans Canada Trail

The trail will be a welcomed addition to the annual Lilac Festival held each year in May.Funds for the trail construction were provided from the National Trails Coalition. 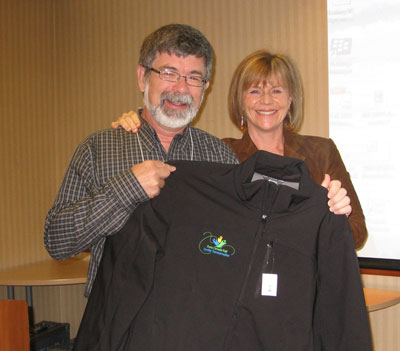 Al MacPherson, Volunteer of the Year

The Trans Canada Trail is one of the largest volunteer projects ever under taken in Canada. Each year we honour a Volunteer of the Year who has made an exceptional contribution to the Trail.

At the AGM, Valerie Pringle announced this year’s Volunteer of the Year –Al Macpherson of Lindsay,ON.

Al has a wealth of knowledge about recreational trails and he is committed to volunteerism and community involvement, which has driven the success of the Kawartha Trans Canada Trail. It has developed an innovative model for community partners to “adopt” sections of the trail. By involving service and church groups,municipalities and college and schools as “managing partners”, it has close to 200 active volunteers and powerful links in the community.

Al is a trail visionary. He believes trails can be much more than physical routes on the ground. : With four primary schools, two secondary schools and Fleming College backing on the Trail, Al is working hard to make the Trail a resource for learning. He has played a pivotal role in the development of primary school curriculum that gets students out on the Trail for physical education, geography and biology classes.

2009 Volunteers of the Year 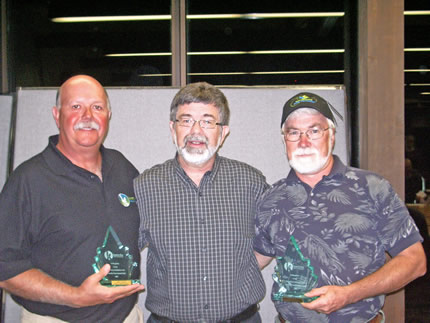 Jim Paterson left and Bill Elliott right were recognized by the Board of Directors of the KTCTA at the Kawartha Trans Canada Trail Association AGM October 20/09 for their outstanding efforts in the construction of the Kawartha Trans Canada Trail. Al MacPherson President of KTCTA presents a small token of everyone’s appreciation for their contribution. 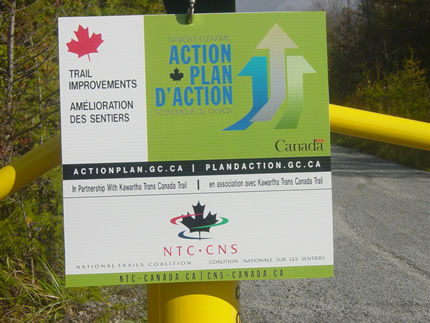 Signs are going up! 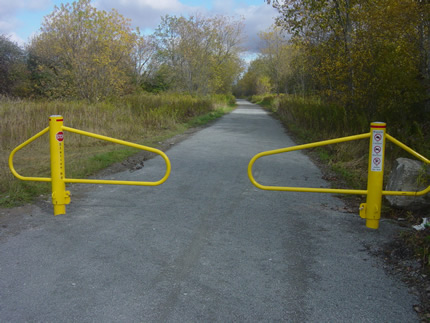 Although more signs and barriers need to be installed along the west section of the Kawartha Trans Canada trail with the assistance of the Unity Church and Al Bambra all the gates have new signs installed. 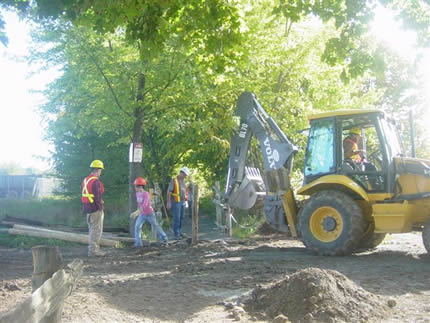 Outdoor Adventure Program Students of Fleming College, Fleming Campus working on the KTCT in cooperation with the Heavy Equipment students.

The two programs have united their efforts in the construction of a traffic control barrier to provide a safe passage to visitors using the trail. The Heavy Equipment Backhoe operator student is digging a hole for cedar posts. The trails students construct a barrier and fence where the trail crosses the Heavy Equipment Road.

The construction of the trail from the hwy 7 overpass west to Simcoe St. is now complete and the trail bed is topped with limestone and graded making for a great trail surface. This section is still technically under construction and will not be open for public use until the gates are installed and the bridge over the Mariposa Brook is repaired and decked. The bridge decking over Mariposa Brook should be completed by the end of the week, September 18th.

The extension of the trail east of hwy 7 overpass to Angeline St. is complete, however this section is not open to the public until the gates are installed.

The new trail across the campus property of Fleming College was completed on August 28th. The trail will not be opened however, until the bridges over the ditch areas adjacent to the roads are built and road crossings are properly controlled and posted with signs. This work will be done by the college students this fall as part of the Recreation Trails Program.

The new gates will be installed starting the week of September 14th. Once the gates are installed the new signs will be posted to identify the trail as part of the Trans Canada Trail and to indentify unauthorized uses.

To further control unauthorized uses we will be fencing the trail entrances at a number of the road crossings, specifically Station Road and Eldon Road. This fencing will be contracted out and completed this fall.