Our 2011 Adventure Travel Festival was a great success!

Watch for information about our Adventure Festival speakers – Colin Angus and Kevin Callan, coming soon! Mark down in your calendar – June 1st and 2nd, 2012. 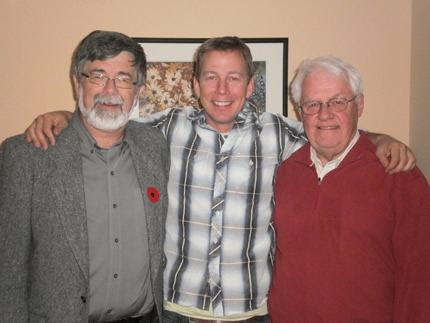 Eric Larson (centre) Explorer, Al MacPherson (left) President KTCTA and Pete MacLoghlin (right) Event Committee Volunteer thank Eric for his inspiration talk at a farewell gathering at Pete and Chic MacLoghlin’s house. The event was a great fundraiser for the Kawartha Trans Canada Trail. Plans are underway for the next event planned for June 1 and 2nd, 2012. 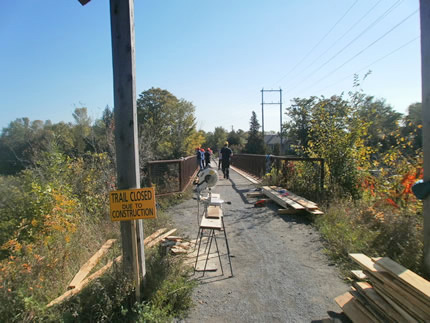 Students, staff, and faculty from Sir Sandford Fleming College Trails course along with KTCT volunteers help redeck the bridge in Omemee along the KTCT.

Trail Lease Extended to 2018 and Beyond? 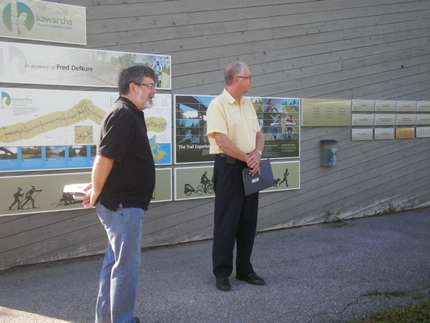 Rick Johnson (MPP) and Al MacPherson (President KTCTA) annouce (August 30/11) the lease extension of the Kawartha Trans Canada Trail unitl 2018. As stated by Rick Johnson plans are to have this extended until 2025.

Haliburton-Kawartha Lakes-Brock MPP Rick Johnson visited the Frost Campus on Aug. 30 to celebrate the extension of an agreement the province has with the Kawartha Trans Canada Trail Association (KTCTA).

The KTCTA, a non-profit organization, has reached an agreement with the province to extend its current agreement by five years, until 2018, continuing to maintain and improve the trail in the Kawartha Lakes area.

The trail runs through the campus and the KTCTA has a close working relationship with Fleming College to ensure the campus portion is maintained and safe for all users. On the campus portion of the trail, users can view a regional map of the trail as well as signage that details local plants and wildlife, and a donor wall. The campus has also extended its lease agreement with KTCTA.

The strengthened partnership between Ontario and the KTCTA will ensure that this once-abandoned railway corridor will continue to offer Ontario families a healthy all year round experience.

“This extension will allow our Association to maintain its momentum and focus on updating, developing and managing a critical link for the Trans Canada Trail system,” said Allen MacPherson, president of the KTCTA.

“The Kawartha Trans Canada Trail Association will continue to develop and maintain a key green space that is enjoyed by the community while promoting tourism and economic development in the City of Kawartha Lakes,” said MPP Johnson, who is also Parliamentary Assistant to the Minister of Infrastructure Bob Chiarelli. 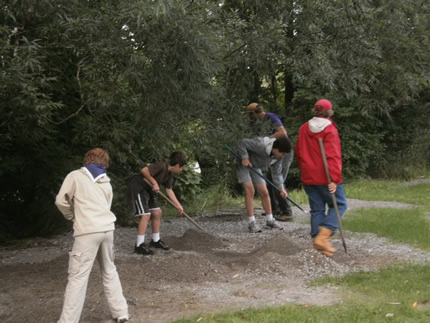 On Thursday August 11, volunteers came together to repair a section of trail washed out by the heavy rains from two weeks ago. Aside from KTCTA volunteers, there were Reaboro, Unity Church and Fleming College managing partners involved and the Boy Scouts from Reaboro. Many hands had the job done in two hours. 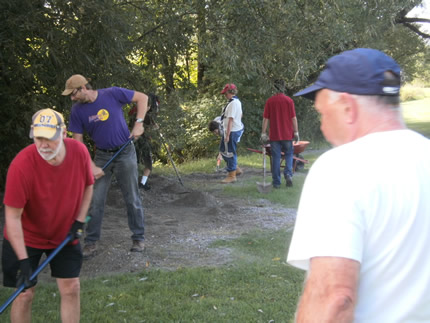 Another photo of volunteers repairing damage to trail. 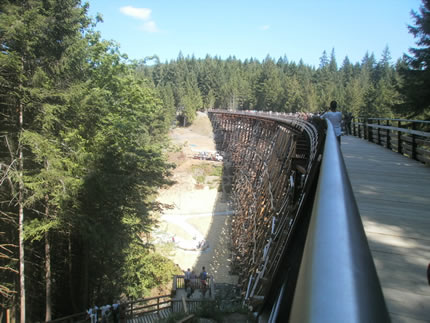 In late July 2011 on Vancouver Island during a family visit we attended the reopening of Kinsol Bridge. As the photo indicates it is beautiful, situated in the middle of nowhere, and connects the Trans Canada Trail from Victoria to Naminao and beyond. Cost $7.5 million dollars and we are trying to find $3000 to redeck the Pigeon River Bridge. 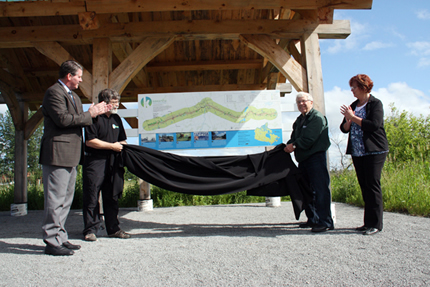 Attention all trail users please stay on the tread area of the trail as the ditches and shoulders of the trail has poison ivy. It is impossible to control as it is found along the entire 44 km length of the trail.

Leaves of three, let it be! 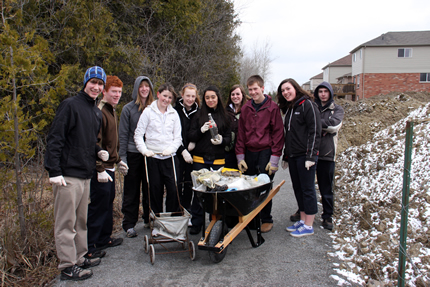 For Earth Day over 150 volunteers stretching across our 44 km of trail came out to clean up the trail. The photograph shows St.Thomas Aquinas High School students helping out. They collected over 60 vehicle tires along the trail.