The Optimist Club of Lindsay Loves Your Trail

The Optimist Club of Lindsay, currently with a membership of over 50, has served the area for over 45 years. Founded in 1971 on principles created by Optimist International, the club promotes its credo, “A Friend of Youth”, by devoting all efforts, energies, and funds to and for the betterment of youth in the City of Kawartha Lakes. Members meet the first and third Thursdays from September to June.

The Club offers activities that support the youth of the City. During the fall and winter months, a recreational dodgeball evening for youth in grades 4 to 6 is offered on Tuesday nights for eight weeks. In May and June, a recreational soccer program is offered for eight weeks for youth of all ages under 19 years, a program that has grown from 50 participants in 1981 to over 600 participants in 2016.

In addition, the Club provides funding to support several programs offered for youth by other organizations in the City of Kawartha Lakes such as Boys & Girls Clubs of Kawartha Lakes, Kids Interactive Arts Program and secondary and post-secondary youth leadership scholarships. On request, the Club also assists youth who are pursuing opportunities at provincial and national levels in areas of arts, culture, and athletics.

The Club has made major donations over the years towards construction projects of the Recreation Complex, Ross Memorial Hospital, Lindsay Library, Boys & Girls Clubs of Kawartha Lakes and Wilson Fields. Most recently, the Trans Canada Trail maintenance program and the new walking oval at Kinsmen Park for the Queen Victoria Public School community.

The Club is particularly proud of the new Optimist Soccer Park (3 regulation sized fields) on the 13-acre site identified as Wilson Fields East located east of the tennis courts on St. Joseph Road and south of Colborne Street West . The park includes parking and pathways that community members have used extensively since the park opened in the summer of 2013. This exciting multigenerational park project is proving to be a wonderful resource for all citizens of Lindsay.

To support its contributions to the community, the Club sells Christmas trees throughout December, runs the youth dodgeball program,the youth soccer program and, most recently, held its first annual fundraising dodgeball tournament for adults.

Mackey Funeral Home of Lindsay was the first business to commit financial support for maintenance and awareness of the Kawartha Trans Canada Trail. Linden Mackey said, “We believe the trail speaks to the quality of life we all enjoy in our community and it’s worthy of our community’s support.”

The Kawartha Trans Canada Trail Association launched their Love Your Trail Campaign on Tuesday, October 27, at the new Days Inn and Suites in Lindsay. The event attracted about 100 people to hear from the Association’s Chair, Al McPherson and their Campaign Chair, John Hagarty. The two Chairs addressed the status of the Trans Canada Trail and the accomplishments of their association. They also introduced components of their campaign, volunteer Trail Champions, and their first business sponsors.

“I use the Kawartha Trans Canada Trail because I enjoy running and I know that many other people walk or ride their bike on the trail,” said Mackey. He continued, “the trail is important to our community because it provides great outdoor, education, and heritage connections.”

The sponsor component of the campaign is intended to attract what are referred to as ‘Five. Five. Five.’ Sponsors. Those sponsors each agree to provide $1,000 to the association each year for five consecutive years commencing in 2016. Campaign Chair John Hagarty said, “our thinking is that we need to establish some assurance of continuity in support of the trail for the next five years.” It is believed these key sponsorships will come from five businesses, five service clubs, and five individuals. Additional, smaller donations are expected to help bolster the support offered from the major sponsors of which Mackey Funeral Home is one.

Other businesses have since come forward to support the trail association. Their campaign goal is $125,000, while their objective is to obtain $75,000 from business sponsors.

The Mackey Funeral Home is proud of its longstanding relationship with families in Lindsay, Ontario and surrounding communities. It is independently owned and operated by a third generation of caring Mackey family. The ‘Mackey’ quality of care is renowned throughout this region.

Two of the best things in life are working outside on a crisp fall day and sharing good food and wine with friends. That’s just what the residents of Reaboro did on a beautiful September day. About a dozen neighbors gathered with chainsaws and muscle power to remove Manitoba maple and dead elm along our five kilometre section of trail. We gathered in the evening for a hearty potluck meal.

The village no longer has a church or school, but we all share a love of this treasure in our back yards.

It’s the Trail that brings us together.

It has been another year with lots of accomplishments thanks to our volunteers, managing partners and Board of Directors.

Our volunteers continue to do many tasks to keep our trail safe and to maintain its quality, such as bridge decking replacement, grass cutting, painting, sign installation, tread repair, gate and barrier repairs, and the list goes on. Thank you.

If you are able to help out financially please use our new online website donation form. Remember tax receipts are issued for all donations of $20 and above. A donation also makes an excellent Christmas gift for someone who is hard to buy for. 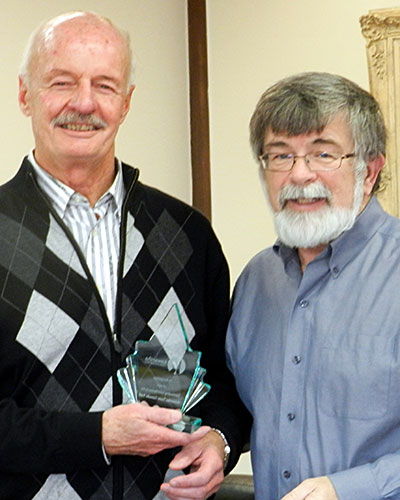 Pictured above is Ted Abbot being congratulated by KTCTA President Al MacPherson at the Annual General Meeting on November 25th, 2015. 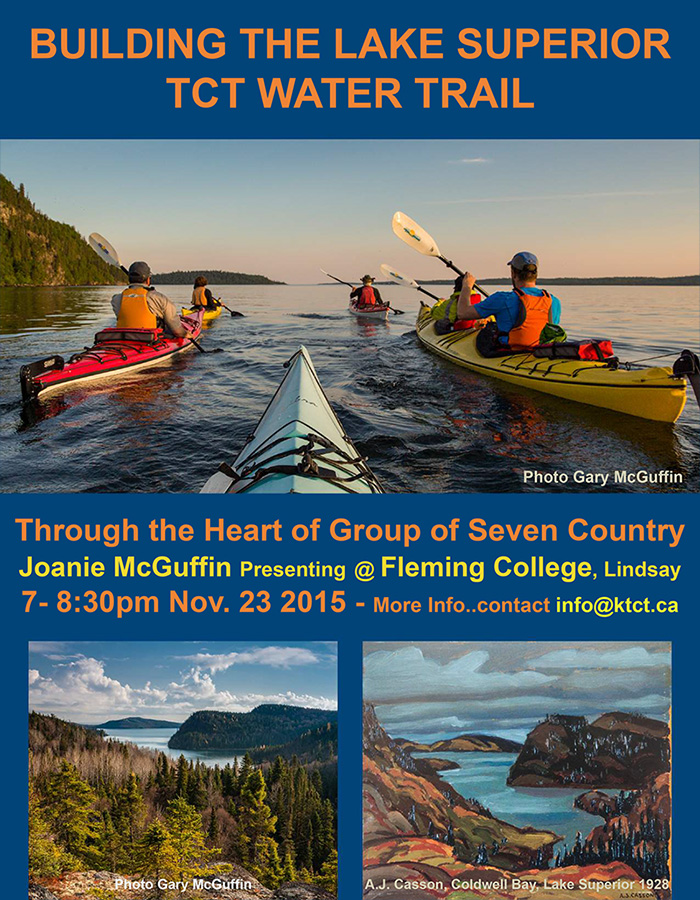 Travel with us through the heart of ‘Group of Seven’ country in our presentation on Building the Lake Superior Trans Canada Trail water trail, presented by Joanie McGuffin.

Admission is by donation. All funds go directly to supporting Kawartha Trans Canada Trail maintenance. We look forward to seeing you for this great presentation!

Thank you for making our Love Your Trail campaign launch a huge success! Check out our Trail Gallery or follow this link to see some great photos of the event!

We’d like to thank everyone who attended the Love Your Trail campaign launch on October 27, 2015. It was great to see so many people come out to offer their support for the trail.

Today, we celebrate Canada and everything that makes us proud to call this country home. We also celebrate how far our national Trail has come, thanks to you! Watch TCT’s Canada Day video on the TCT National Youtube page.

On June 6th, help us celebrate International Trail Day 2015! Join your community and enjoy your section of Canada’s national trail.

Thank you very much to our excellent sponsors for their promotion of the Great Canadian Bucket List event. We are grateful for local support of the trail and activities!