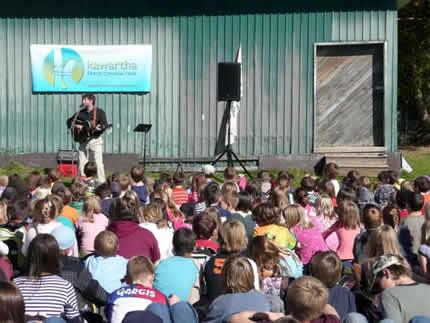 On Tuesday, October 7th, with the Lindsay to Omemee section completed, we celebrated the official opening. In the afternoon, under blue skies, Valerie Pringle, TCT Chair, cut the ribbon in Omemee as the 500 schoolchildren thronging the trail cheered. At 7:00, in Fleming College’s Crombie Theatre, a crowd heard from KTCT President Al MacPherson and Valerie Pringle, enjoyed a slide show presented by Dan Andrews, head of the Ontario Trans Canada Association, and heard singer David Archibald singing a song composed for the event.

Here’s how Jeanne Pengelly, Communications Officer for the Trillium Lakeland Board of Education, described the Omemee event:

“The only thing bigger than their smiles, were their hurrahs. As students from Lady Eaton Elementary School and Scott Young Public School in Omemee formed an audience to the east and west, national television personality Valerie Pringle cut the red ribbon to officially open the newest section of the TransCanada Trail. The section, from Omemee to Lindsay, was completed this summer. The trail runs behind both Omemee schools.

To celebrate the event, entertainers, dignitaries, neighbours, teachers, principals, cyclists, walkers, and even a horseback rider joined the students in the yard of Lady Eaton Elementary School. “This is spectacular, wonderful country,” said Pringle, who is also chairperson of the Trans Canada Trail. “You and this trail right here connect you like a thread to all of Canada. It is a magnificent dream, and it’s yours.”

The longest trail in the world is being completed section by section, by local volunteers and donations. Karen Cook, co-ordinator of Community Relations for the Kawartha Trans Canada Trail Association, told students they would be the “guardians of the Earth in the future.”

“I almost get teary,” Cook said as she prepared for the event. “To me it’s about preserving the environment and giving future generations a place where they can enjoy it. What better place to hold this event than here at the schools, where we can open a window for those future generations.”

Lady Eaton Elementary School Principal B.J. Mailloux-Brown urged students to look to their own backyards. “Leave the computers, the cell phone, the electronic games,” she said. “Put on your sneakers or your skis or your snow shoes. It’s all about connecting with nature and connecting with each other. It’s very exciting that this is right here in our back yard.”

Pictures of both events will be posted in a gallery shortly. We will also be posting David Archibald’s song as an audio file.